Opening remarks were given by H.E Ban Ki-Moon, President and Chair of GGGI, through a video message, who welcomed all participants in attending this special virtual event and emphasized on the need to work together as CSO has much to contribute, can function as an instrumental bridge between government and communities, and their voices are absolutely important for development and enhancement of policies, financing, and climate justice, for a more inclusive approach and impactful result.

Keynote speeches from the first session  were also given by  Mr. Ibrahim Aida, Executive Director of OSIWA, who addressed the direct and negative impact of climate change on environment and vulnerable communities. He also mentioned the engagement of OSIWA towards Civil Society Organization to strengthen, support, and equip West Africa’s CSOs through capacity building.

Following this, Ms. Emily Benson, Director of Engagement at Green Economy Coalition,  shared some example and gave couple of points on why CSO’s involvement is crucial to this green transition. She also mentioned the fact that CSO participation is just not a moral question but an important key for scaling and transforming policies in the fight against climate change.

Dr. Frank Rijsberman, Director-General of GGGI, expressed the importance of climate change adaptation in Africa which goes side by side with climate mitigation.

The second session had important intervention from ten West African CSO Representatives who shared knowledge on the challenges they face in their fight against climate change while proposing solutions and strategic decision-making.

The webinar ended with words of thanks from Mr. Ibrahim Aidara towards all participants for their engagement in advocating for climate justice despite the numerous challenges. 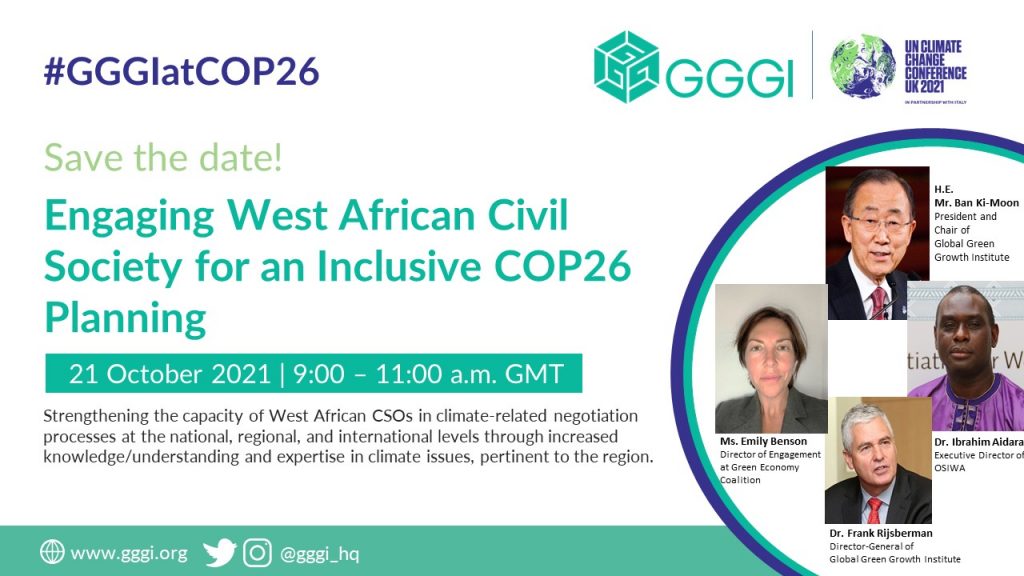