This op-ed was originally published by Eco-Business.

International climate scientists have agreed that in order to keep global warming to within 1.5 degrees Celsius and to avoid disastrous consequences, the world needs to reach net-zero carbon emissions by 2050. Scientists have also indicated that to be on track to reach this target by 2050, global emissions have to be reduced by 45 percent to 50 percent by 2030.

Recent reports from the United Nations (UN) show that the international community has not made much progress in moving towards these goals. This is despite the adoption of the Paris Agreement, the most far-reaching climate accord we have, in 2015. However, the good news is that there has been an avalanche of promises and commitments. Over the past two years, most countries have adopted net-zero targets, with the majority pledging to do so by 2050.

The Republic of Korea has made rapid and very impressive progress on this front. It is catching up with the frontrunners among Organisation for Economic Co-operation and Development (OECD) countries, moving forward from a position somewhere at the back of the pack. Last August, South Korea’s National Assembly enshrined the country’s target to reach net-zero by 2050 in law. President Moon Jae-in followed up with a commitment to stop financing coal-fired power plants in April this year. In May the same year, he committed to significantly green South Korea’s official development assistance (ODA) as part of its foreign assistance strategy.

What’s left now is putting in the final piece of the puzzle. The international community has been urging South Korea to put in place a more ambitious nationally determined contribution (NDC) target and it is expected that President Moon will formally commit to a revised target of increasing it by 40 per cent at the UN Climate Change Conference (COP26) next month. The next step will be to identify solutions that the government and the private sector can put in place, to deliver on these ambitious commitments in the short time that remains before 2030.

The international community will look to South Korea on two important fronts. The first is for South Korea to lead the charge in convincing other Asian countries to step up on their climate action. Currently, one of the key obstacles to a carbon-neutral world is the use of coal. Asian economies have increased coal use in recent years. Replacing coal with clean energy is a top priority and hopefully, Korea can lead the way in Asia.

Secondly, developing countries are looking to advanced economies such as Korea to support their climate action with funding and technology. It is significant that South Korea has committed to increasing the green share of its ODA. At the Global Green Growth Institute (GGGI) that I belong to, we were pleased when President Moon announced in May this year at the P4G Summit that South Korea will establish a Green New Deal Fund at GGGI to support a green recovery from the pandemic and to accelerate climate action in developing countries. The call was repeated months later at the UN General Assembly.

GGGI has supported 29 developing countries in coming up with more ambitious NDCs for the Paris Agreement and it has also helped these countries develop green investment projects that will help them in fulfilling their climate promises. From 2015 to 2020, GGGI developed and mobilized green and climate finance for green investment projects worth over US$2 billion. The institute is working on a pipeline of such projects with a value of US$5 billion.

For a green recovery from the Covid-19 pandemic, green investment projects that accelerate climate action such as those related to renewable energy or reforestation will be critical. These are also excellent opportunities to create green jobs. A recent study published by GGGI shows that the implementation of renewable energy targets in the NDCs of 29 GGGI member countries will create 10 million job-years in employment opportunities and that the implementation of forestry-related targets in 14 GGGI member countries can create 35 million job-years – at a cost far lower than equivalent fossil fuel alternatives.

While South Korea has an important international role to play, other countries can also make contributions too. Estimates from the South Korean government show that it is not possible for the country to achieve the entire 40 percent greenhouse gas emission reduction by 2030 that it has pledged through domestic reductions alone. The Paris Agreement allows for Korea to collaborate with other countries to reduce emissions or for it to capture carbon through reforestation and sell these as carbon credits, which Korea is expected to purchase to meet its commitments.

Organizations like GGGI have been preparing for the new international carbon market under Article 6, expected to be finalized at COP26 in Glasgow next month, by working with developing countries to help them put in place the right governance, policies, and data systems, specifically monitoring, reporting and verification systems (MRVs), for it to make carbon trades once allowed. GGGI is also exploring whether it can facilitate such transactions through the establishment of a carbon transaction platform.

This platform will enable the South Korean government and private sector companies with their own net-zero commitments who are looking to buy carbon credits internationally to obtain these through GGGI.

In short, the climate crisis is one that affects us all. It is a crisis that does not respect borders, but to overcome it, international collaboration across borders is required. Solving the climate crisis will depend on all countries working together, with each of them contributing to their own NDCs, and also working with others to share resources, technology, and carbon credits.

We used to think that the climate crisis would only affect our grandchildren or great-grandchildren but now we know that it has an immediate impact on everyone all over the globe. Currently, there are more than 25 million climate refugees escaping from floods and droughts every year. It will require bold leadership and urgent action to avert a crisis that threatens the future of human civilization and Korea has taken the right step forward. We are living through a decisive decade for climate action and our only hope is for countries, governments, the private sector, and civil society to work together effectively to accelerate the green transition and take radical climate action.

This op-ed was originally published in Eco-business. 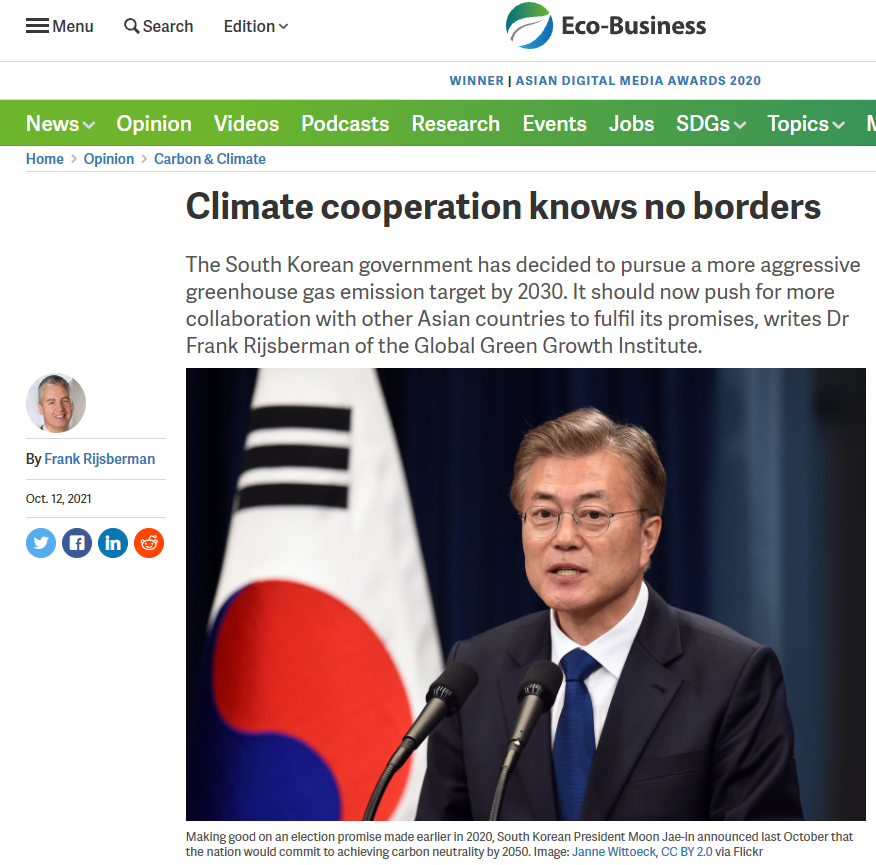