10th Session of the World Urban Forum : Cities of Opportunities

Tenth Session of the World Urban Forum (WUF10),is the first major UN event in 2020 marking the start of the Sustainable Development Goals Decade of Action. Meaning world leaders called for a decade of action to deliver the SDGs by 2030 and announced more than 100 ‘accelerated actions’—voluntary undertakings to speed up progress.

Abu Dhabi, United Arab Emirates hosted the Tenth Session of the World Urban Forum (WUF10) from 8-13 February 2020 , bringing together human settlement experts from around the world. The theme for WUF10 was Cities of Opportunities: Connecting Culture & Innovation. Sessions took stock of emerging innovative approaches and practices in harnessing culture and innovation as drivers for sustainable urbanization, and provided greater insights on the linkages between urbanization, culture and innovation as a basis for achieving inclusive, safe, resilient and sustainable cities and human settlements. The Forum provided a pre-eminent platform for Rwanda to showcase and share its inclusive urbanization agenda and to lay the platform for the hosting of the Commonwealth Heads of Government Meeting in June. 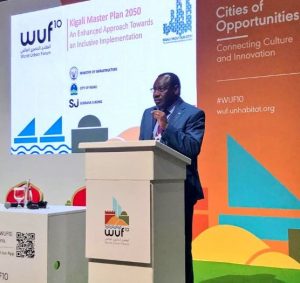 The Ministry of Infrastructure and GGGI shared the stage as part of panels in the special session on “Delivering Sustainable Urbanization & Development in the Commonwealth”, which was held on Sunday 9th March. The key themes were on Rwanda’s approach to green cities, with emphasis placed on the Kigali Master Plan and GGGI’s work in supporting of greening the country’s secondary cities. Additional emphasis of the panel, with representatives from the CLGF, World Bank, DFID and UN-Habitat contributed to the discussion related to climate change and resilience, which was a major theme throughout the forum and have significance for Rwanda’s smart green approaches. Key partners Rwanda Green fund ,and City of Kigali showcased the Kigali city masterplan and the green city project. Rwanda was able to showcase initiatives towards sustainable urbanization across the Commonwealth, focusing on the work done in Rwanda on both vertical & horizontal integration of development approaches as means to achieve the sustainable development goals. The Honorable Minister Gatete mentioned that the “Commonwealth countries should be prepared to manage 60% urbanization by 2030 of which 50% of this increase will come from Commonwealth countries” 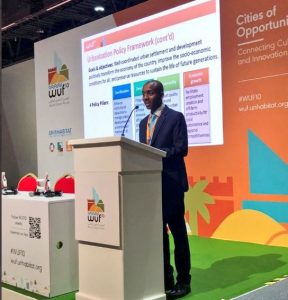 GGGI’s Global Lead on Green Cities, Mr Donovan Storey joined the panel discussion on “Urbanization – An engine of inclusive green growth“ where he spoke about GGGI’s work in secondary cities, and more broadly on support for an inclusive, sustainable and resilient urban system in Rwanda. Specific challenges in bringing this about included the need for the right scale of investment and strengthening local urban institutions to deliver on services. Secondary cities in Rwanda have ambitious development goals, and their development will be crucial to the country’s overall national development. Innovation solutions such as through aggregated investment in infrastructure, was key in  meeting the needs that were not easily ‘bankable’ through traditional institutions. Finally, Mr Storey highlighted Rwanda’s recent Green Building Minimum Compliance System as an outstanding example for the region in progressing the use of low-carbon and low-cost building materials, which GGGI presented on in additional sessions at WUF10. 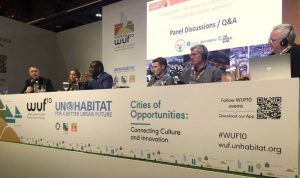 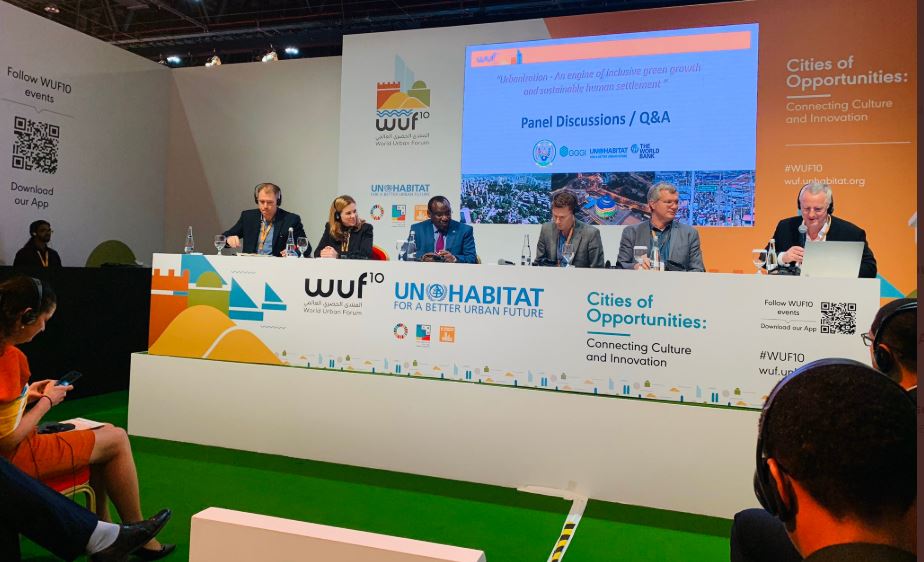