Globally, transport contributes to 16.2% of total GHG emissions. Overall, GHG emissions from the transport sector have doubled since 1970. The majority of these emissions come from road transport due to of petrol and diesel by cars, trucks, motorcycles, and buses. In Rwanda, transport accounts for 13% of all GHG emissions and is expected to rapidly increase. Total vehicles registered in Rwanda grew from under 50,000 in 2006 to over 160,000 by 2015, representing an increase of over 300%. With continued (and rapid) urbanization, rural-urban migration, as well as population increase, GHG emissions due to transport are expected to continue to rise.

Walking and cycling represent two of the most cost-effective ways to reduce GHG emissions from the transport sector.  Increasing the walking modal share by 20-25% reducing GHG emissions by 6.9% at a cost of 17 USD per tCO2. Increasing the bike mode share by 1-10% can reduce GHG emissions by 8.4% at a cost of 14 USD per tCO2. In addition, walking and cycling avoid adding to the increasingly hazardous air pollution affecting Rwanda’s cities. Nationally, Rwanda’s annual mean concentration of PM2.5 is 43 µg/m3, which exceeds the recommended maximum concentration of 10 µg/m3. In Kigali, PM2.5 levels have reached as high as 185 µg/m3, representing a significant public health hazard that is known to strongly correlate with increased respiratory infection rates. In addition to PM2.5, cities in Rwanda have recorded elevated levels of pollutants including PM10 and NO2 exceeding World Health Organization (WHO) guidelines due to a number of factors including the increase of motor vehicle emissions.

African Mobility Month (AMM) is a campaign led by Local Governments for Sustainability (ICLEI) which aims to promote sustainable mobility in African cities. The theme for this year’s AMM was “Re-imagining the future of urban mobility in African Cities.” The aim of this year’s campaign was to advocate for people-centered, low-carbon, and resilient mobility that contributes positively to urban citizen’s health and wellbeing by promoting sustainable and equitable mobility in African cities. In Rwanda, GGGI partnered with the European Union, We Do Green, the Institute for Transportation and Development Policy (ITPD), and GuraRide to launch a walk-to-work and bike-to-work challenge. The competition used a website featuring a calculator to determine the emissions avoided as a result of participants swapping commuting by motor vehicle to either walking or cycling. The challenge registered a total of 75 individual participants as well as 15 teams. Overall, a total of 220.8 kg of CO2 were avoided through the challenge, an effort that would potentially result in 2.6 tCO2 being avoided over the course of a year if continued.

Participants stated that the competition “encouraged their office to think about their mode of transport. Repeated action on this will eventually lead to change in behavior as Kigali is getting busier and more polluted each year.” Felibien Hirwa Tuza stated, “I am glad that I was able to participate in African Mobility Month. You don’t realize the beauty of your natural environment until you stop driving and walk in close proximity, seeing, touching, smelling, and feeling such green beauty.” The campaign also organized a presence at the bi-monthly Kigali Car Free Day to engage with city residents. The challenge concluded with a ceremony at the European Union Delegation in Rwanda to recognize the individual and team entrants for their efforts. 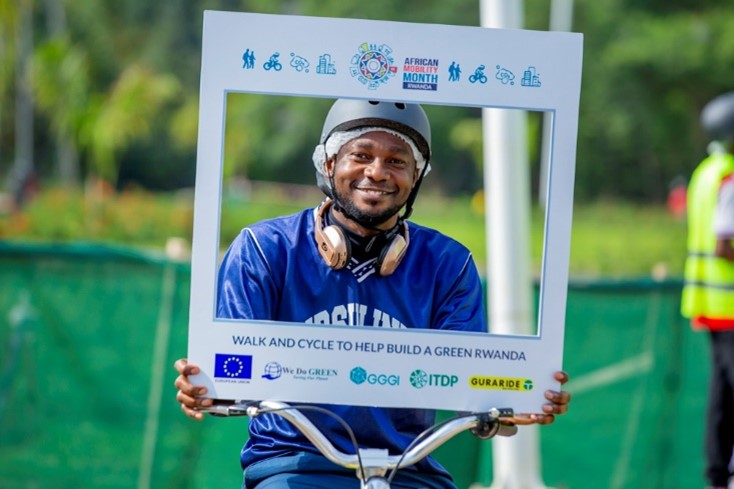