Kigali, 8 December – During the Rwanda Green Growth Week (RGGW), the Global Green Growth Institute (GGGI) in collaboration with the Ministry of Infrastructure (MININFRA) organized a Training of Trainers (ToT) event on Project Proposals Development and Financing for District Technicians as part of the capacity development programme for the six secondary cities to support them in implementing projects that are in line with the National Roadmap for Green Secondary City Development. District Technicians also benefited from presentations by the African Development Bank (AfDB) officials on different opportunities where the proposed ideas could be channeled for financing.

Mr. Edward Kyazze, Manager of the Urbanization and Human Settlements Division at the MININFRA, in his opening speech encouraged the District Technicians to view the ToT as an opportunity to learn how to develop their ideas and concepts into bankable project proposals. He added: “You are architects of the future of Rwanda, you will have to pass the knowledge and train others, so we all move forward together.” GGGI Country Representative, Innocent Kabenga welcomed participants from the districts, guests from Rwanda Housing Authority (RHA), and AfDB, and stressed that, “Being trained as a trainer on preparing bankable project proposals comes with a responsibility for future of Rwanda and the knowledge you are acquiring will make you the pioneers of green growth in Rwanda.” 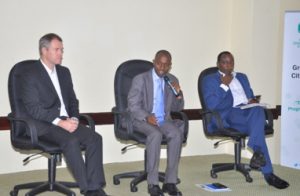 Opening session by Donovan Storey of GGGI, Edward Kyazze of MININFRA, and Innocent Kabenga of GGGI.

Dr. Donovan Storey, GGGI’s Deputy Director and Urban Lead – Green Cities, stressed the importance of reducing pressure on Kigali by developing the six secondary cities as poles of growth in a more sustainable and liveable way. He further talked about GGGI’s support to turn the innovative ideas of the different participants from the secondary cities into bankable project proposals.

The two-day ToT, which was attended by 35 participants, is the second to be held in Rwanda in 2017. The first one took place in Huye in May 2017, and was attended by district officials in charge of urban planning, urban infrastructure development, and environmental and social safeguards from the six secondary cities. During the ToT, participants produced six project concept notes; four on sustainable solid waste management, one on urban transportation and mobility, and one on renewable energy for urban public spaces. This ToT will enhance the capacity for technicians from Huye, Rusizi, Nyagatare, Muhanga, Musanze, and Rubavu in project proposal development, designing evaluations, and building result frameworks. 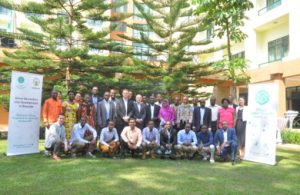 Participants of the Training of Trainers in Kigali

The 2-day ToT was carried out through a mix of interactive presentations, group discussions, hands-on application of practical skills, and the use of tools for designing result frameworks and change management based on real project concepts identified by the participants. The event also provided insights on the concept of the “Circular Economy” and its application. 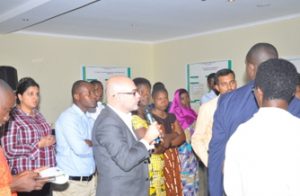 District Technicians presenting ideas on what could be bankable projects in their respective cities. 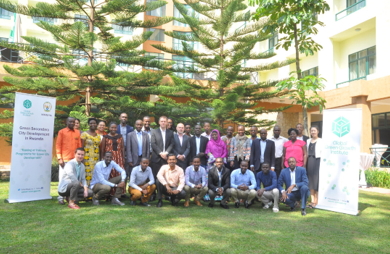