Toward the Future of Climate Technology and Entrepreneurship in Indonesia

In order to support the Government of Indonesia to achieve the Nationally Determined Contribution (NDC) target in 2030, the Fiscal Policy Agency, Ministry of Finance Republic of Indonesia, in collaboration with the Ministry of Economy and Finance, the Republic of Korea held a joint workshop titled “Accelerating Climate Technology and Entrepreneurship” on February 4, 2021. 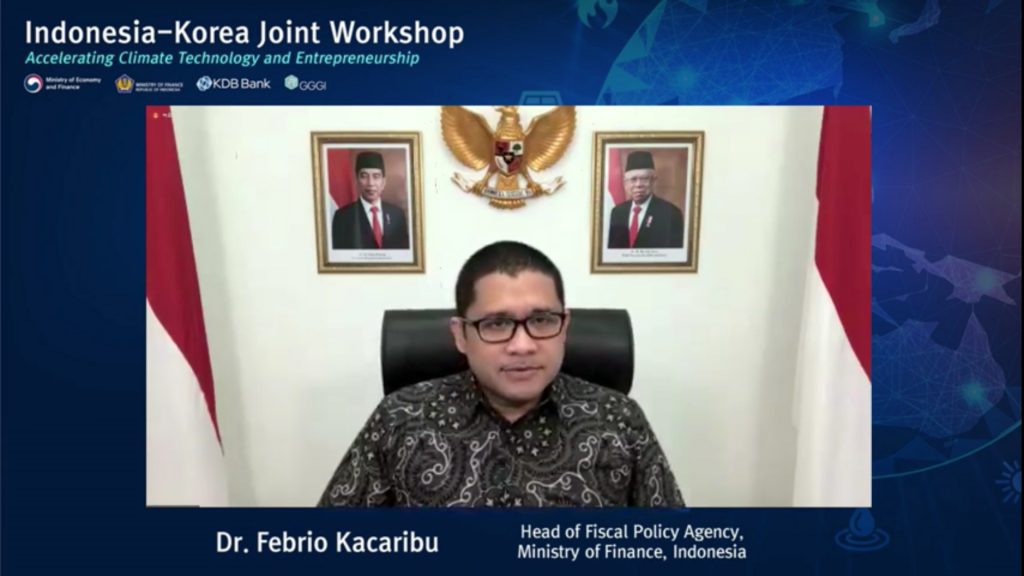 Technology transfer between countries is one of the keys to address the climate challenges. According to Laksmi Dhewanthi, Senior Advisor to the Minister of Environment and Forestry of Indonesia, it is also one of the modalities that Indonesia seeks from the international support, aside from the financial support and capacity building to achieve Indonesia’s NDC target of 41% emission reductions by 2030. Yudi Antanasena from the Agency for the Assessment and Application of Technology (BPPT) stated that Indonesia currently has various technological gaps in the energy, forestry and waste management sectors for climate mitigation and food security, coastal protection and water sector for climate adaptation. Admitting the rough pathway in commercializing a new technology, he conveyed his hope for the private and international community to support the government in filling this gap.

Filling Indonesia’s climate technological gap requires a concerted effort by the government, private sector and international community to accelerate climate technology development and technology transfer. Luckily, Indonesia has become a fertile ground for startups and digital economy in general. In 2019, it ranked the second-biggest digital economy in Southeast Asia following Singapore, predicted to reach USD 124 billion in 2025 and will become the highest in the region. These startups, with their technological advancement, have benefitted Indonesia greatly, including in climate actions. The innovation scope ranges widely from the renewable energy and energy efficiency sector, smart agriculture, to integrated waste management and circular economy.

Most private sector panelists agreed that Indonesia is currently experiencing a wave of new technology innovators who care about the Environmental, Social and Corporate Governance (ESG) issues. Joshua Agusta, from PT Mandiri Capital, remarked that these new innovators have opened various new exciting venture investing opportunities for Mandiri Capital and other investment companies. It is complemented by a new wave of angel investors that are seeking to be involved in the impact investments. These new angel investors, as Shinta Kamdani from Angel Investment Network Indonesia (ANGIN) described, are not primarily driven by monetary gain but more so on contributing towards the achievement of environmental and social impacts.

The emergence of these new innovators and investors should be supported through appropriate policy and regulations by the government. Some challenges were also raised by Dae Hyun Kim from INGINE, a renewable energy technology company. He mentioned that Indonesia needs a strong regulation in intellectual property protection and permit procedure to increase the confidence of private actors in conducting technological development and transfer.

In regard to the company’s readiness, Mr. Antasena from BPPT and Jeong Tae Kim from MYSC, a social innovation consulting and incubator company, also expressed some of the constraints and emerging solutions. Based on BPPT’s data, not many technology innovations reached the point of commercialization due to the greenness of the company’s product and management. At the same time, Mr. Kim also mentioned that the availability of blended finance investments from various parties, including the government, will help boost the research and development of the new startups.

In the spirit of partnerships in tackling a global challenge, countries like the Republic of Korea offers international assistance to partner countries like Indonesia. Sun Yi Lee from the Ministry of Economy and Finance of the Republic of Korea described their Green New Deal Official Development Assistance (ODA) abilities to act as another modality to support technology transfer between the countries. Jung Wan Ryu from Korea Eximbank also supported this commitment. They have supported Indonesian Government in various project such as smart water management system in Semarang and Karian Dam water supply project in Jakarta. 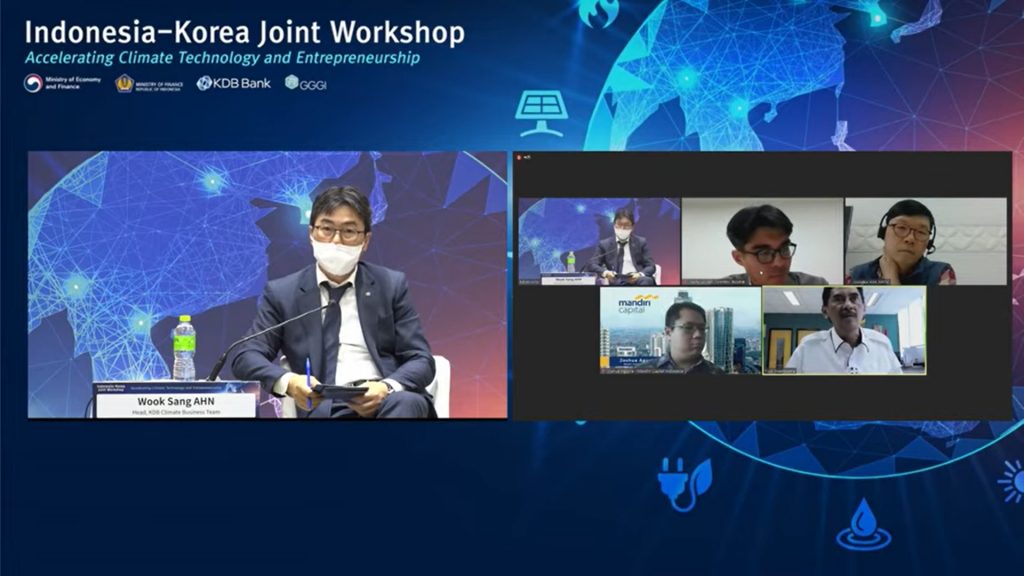 Successful technology transfer schemes, which are mutually beneficial for both the technology provider and recipient, require a strong enabling environment where both parties can co-develop innovative technologies in a sustainable and financially sound cooperation. The Collaborative Research, Development, and Business (R&DB) Programme for Promoting the Innovation of Climate Technopreneurship, that KDB and GGGI are currently developing, seeks to provide a solution on this issue by promoting Joint Venture (JV) collaborations schemes between companies in developed and developing countries, supported by a country-led incubation program, a USD 100 million blended finance investment fund and various technical assistance activities.

Overall, Indonesia seems to manifest its internet economy forecast of becoming the highest in Southeast Asia in 2025. Climate technology will become part of this giant economy and hopefully trickle the effects to Indonesia’s climate change mitigation and adaptation efforts. It falls upon all stakeholders in Indonesia to tap into this promising opportunity and further accelerate climate technology deployment in the country.