Progressive Platforms for Climate Action: Ambitious and Resilient Low Carbon Development for Least Developed Countries – GGGI in Partnership with the UNDP and the EU

The Global Green Growth Institute (GGGI), through the Progressive Platform Project funded by the EU and implemented by the UNDP, supports countries in building the capacity to engage in the UNFCCC negotiations and to progress implementation of the Paris Agreement.

The LDC Group under the UNFCCC is the most advanced grouping of LDCs under any Multilateral Environment Convention and has with its 47 Member countries had significant influence on the establishment of the Paris Agreement and its goals. The GGGI Climate Diplomacy Lead and Specialist, Mr. Gebru Jember Endalew, himself a former LDC Group Chair for the Government of Ethiopia, explains: “LDCs are mostl impacted but the least to blame for the planetary crisis facing humanity. These countries lack political and financial power of influence over international negotiations that substantively impact them. However, by joining voices around shared issues in the climate negotiations and through collaboration within progressive alliances, the LDC Group has been instrumental to establishing and keeping 1.5 degrees target alive. The LDC Group together with Small Island Developing States (SIDS) have also keep the momentum for adaptation and the right to development trough finance, technological innovations and capacity building within the context of the Paris Agreement”.

Under the program and other initiatives, a series of virtual meetings were held with the Least Developed Countries (LDC) chair, thematic coordinators, focal points and other key partners – which has been vital in keeping the momentum in the revision of NDCs domestically across all LDCs.

GGGI has provided capacity development of the 47 LDCs in the climate process. Mr. Endalew and county teams in GGGI LDC Member countries have provided technical and advisory support on NDC enhancement process. Directly linked to the negotiations, the UNDP and EU partnership has delivered specific coordination support to the Article 6 negotiations to ensure evidence driven handling of the Article 6 Rulebook, which as agreed at COP26.

As the focus post-COP26 remains firmly on NDC implementation, the program has also resulted in the development of a comprehensive training program for the mainstreaming of climate and NDC targets across government programs, sectors, and levels of governments. Dr. Dereje Senshaw has led this work with particular focus on the Renewable Energy transition with a focus on Energy Access for All. “Achievement of SDG7 on Energy is both the key to tackle the climate crisis and achieving development and prosperity and most importantly for countries post-COVID Green Economy Recovery”. The aim of much of GGGI’s work is to strengthen the enabling environment for innovations on planning, policy, and investments, which ultimately improves LDCs readiness for mobilization of climate finance at scale, the need for countries’ economy to be able absorb external shocks such as the negative consequences of COVID-19, and the ability to restore itself and continue growing, which remains a key challenge,” Dr. Senshaw says.

In gearing up towards COP27 in Egypt later in 2022, GGGI prepares to scale up efforts to support Members on their NDC implementation, while also identifying opportunities for higher ambitions and better alignments between short term targets and the IPCC recommended pathways towards achieving mid-century carbon neutrality. “GGGI is intensifying efforts to support an increasing number of countries on their Just Transitions towards low-emissions development pathways. This includes a focus on gender transformative and inclusive approaches as a catalyst for more ambitious actions,” Ingvild Solvang, GGGI Head of Climate Action and Inclusive Development says.

The modules were developed through research and expert consultations to ensure that they directly addressed and support the capacity needs of countries on technical support, tracking delivery, enabling learning, fostering multistakeholder engagement, and strategic partnerships. The Modules will be further used in 2022 in the lead-up to Stockholm+50 and COP27. 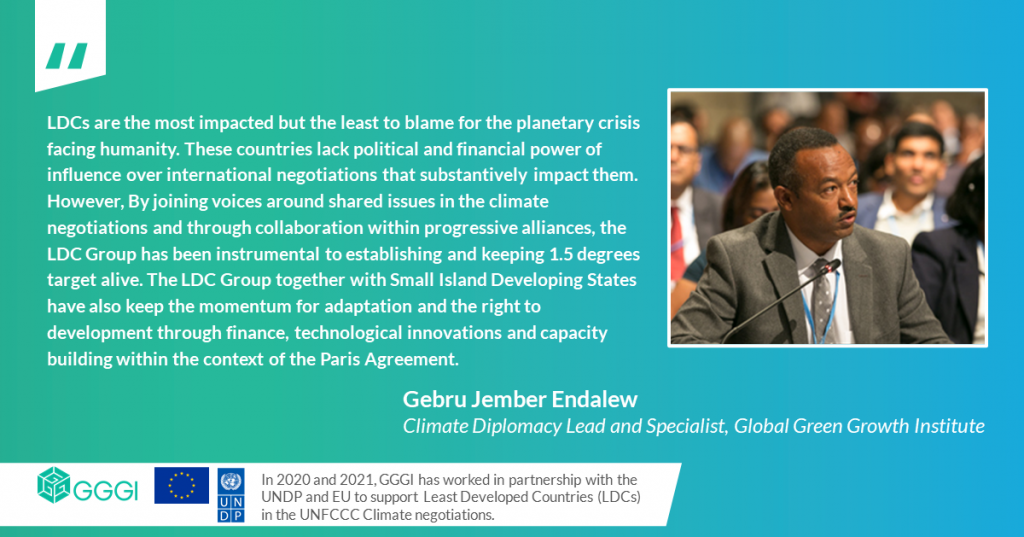