GGGI and the Conservation International supported the Fiscal Policy Agency (FPA) of the Ministry of Finance as Indonesia’s National Designated Authority for the Green Climate Fund (NDA GCF) in organizing a workshop on 19-20 June 2019 in Manokwari, West Papua, as part of NDA GCF’s series of roadshows to raise awareness among local stakeholders on the funding opportunities from GCF. 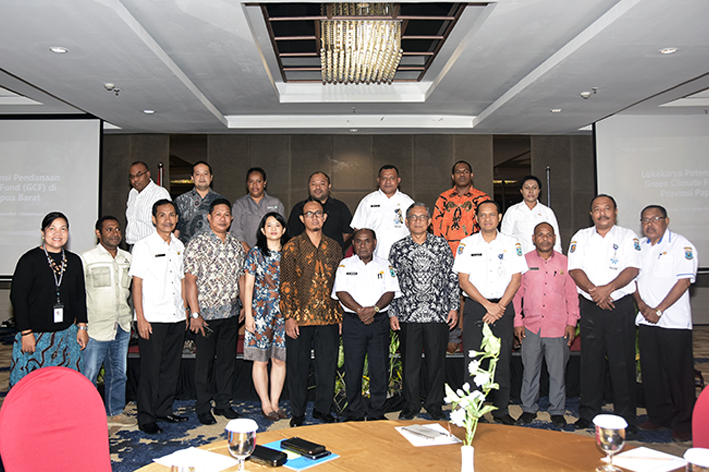 The workshop was conducted in two days with a full-day seminar on the first day and a Focus Group Discussion (FGD) on the following day. The main objective of the workshop is to develop a pipeline of projects related to climate change mitigation and adaptation that could potentially receive funding from GCF. The event was attended by representatives from the local government, NGOs, and academics from a local university.

Officially opening the workshop, the Head of Other Climate Finance Subdivision, Noor Syaifudin, and the Secretary of West Papua, Nataniel D. Mandacan, both emphasized the importance of optimizing climate finance opportunities. Mr. Mandacan also added that there is a strong need to channel available international climate funds into West Papua to support the province’s effort in implementing the Sustainable Province initiative due to government budget limitations. As part of the first-day seminar, representatives from the government of West Papua and Maluku presented the province’s climate action plans and programs.

On the second day of the event, FGD participants were engaged to develop a list of priority projects that have the potential to be proposed for GCF funding. In total, there were 19 proposed projects/programs consisting of 5 AFOLU projects/programs, 4 clean/renewable energy projects, and 10 climate change adaptation projects/programs. After the FGD, the NDA GCF suggested several action plans to follow up on the results of the workshop. The workshop was officially ended with a closing remark from Noor Syaifudin who emphasized that the NDA GCF will work together with Conservation International and the Regional Research and Development Agency of West Papua to deliver follow-up results from the workshop.