Meeting between Ban Ki-moon, Chairman of the Assembly of GGGI, and Vladimir Norov, Minister of Foreign Affairs of Uzbekistan

On October 24th, 2022, in Seoul, the Minister of Foreign Affairs of Uzbekistan, Vladimir Norov, met with the Chairman of the Assembly of GGGI, Ban Ki-moon. Currently, H.E. Mr. Norov is in South Korea to participate in the 15th Cooperation Forum “Central Asia – the Republic of Korea.”

Ban Ki-moon and Mr. Norov spoke about the new opportunities for cooperation since the Global Green Growth Institute (GGGI) Uzbekistan office opened in 2022. The Aral Sea GRIP project in Karakalpakstan, funded by KOICA, is GGGI’s first in Uzbekistan. Ban Ki-moon spoke about his multiple journeys to the Aral Sea region to witness the consequences of the environmental crisis.

Uzbekistan and GGGI will continue and expand cooperation to address climate change, build a greener economy, and invest in renewable energy. Ban Ki-moon highlighted several of Uzbekistan’s ongoing efforts, such as the large-scale initiative “Yashil Makon” (Green Nation) for natural resources and ecological diversity, the Strategy for the Transition to a Green Economy, as well as the Renewable and Hydrogen Energy Development Program.

Reports of the meetings can be found on Twitter and the news portal Daryo.uz (Russian). 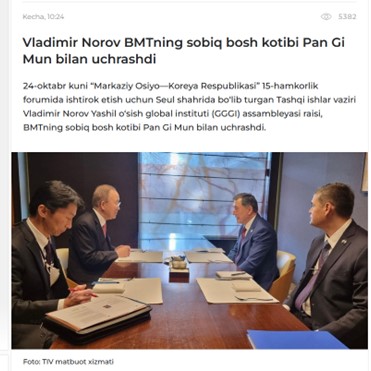