Four GGGI Rwanda team members traveled to two secondary cities of Musanze and Rubavu in July to conduct on-site assessments in preparation for a sustainable mobility project. The team was assisted by two volunteers, Clarisse Mukamana and Sébastien Musabyimana, who performed manual traffic volume counting to help the GGGI Rwanda team gain insight into the modal split of transport by usage in the two cities during peak hours.

The assessment included the use of survey instruments such as the willingness to use and pay, the origin-destination survey and manual traffic volume counting survey to aid in the design of a pilot Public Bikeshare (PBS) program. 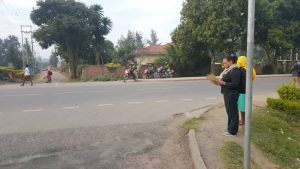 Mapping exercises were conducted to determine potential docking stations and frequently used routes. The surveys included safeguard questionnaires to ensure that the project complements existing modes of transport and to gauge the potential impact on livelihoods of bicycle taxi operators. It is interesting to note that, bicycle taxi operators in both the cities play a vital role in helping people reach their destinations and transport goods across the city although challenges do exist such as the safety of the rider and passenger, non-functional dedicated bike lanes, and access to affordable insurance. 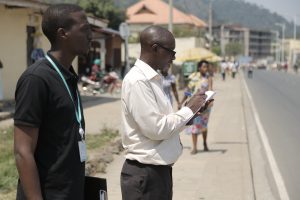 The GGGI Rwanda team came across some interesting observations during their exercise,“It was interesting to compare the initial data from the two cities. Rubavu is a larger city and has already shown a decrease in the use of non-motorized transport options compared to Musanze,” stated GGGI Senior Green Growth Officer, Michelle DeFreese.

“It’s important to develop projects like this now in the secondary cities. I think a lot of people underestimate the potential for bankable green growth projects in the secondary cities. When you look at their projected rates of urbanization, they will reach as high as 9% by 2020. Residents will increasingly need more green mobility options to reach their destinations quickly, safely, conveniently and the service has to be affordable,” she added. 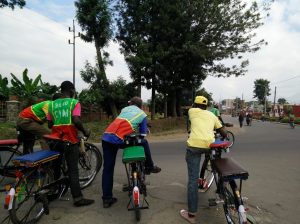 “Both the cities have large share of people using bicycles, we need to ensure that we preserve this character and build on this to develop a citywide public bike share program, which would help in improving outdoor air quality, reduce greenhouse gas emissions and is a healthier option to commute. Furthermore, the weather in Rwanda is relatively cool and favorable throughout the year except for few days in the wet season for bicycle to become a friendly mode of transport.” 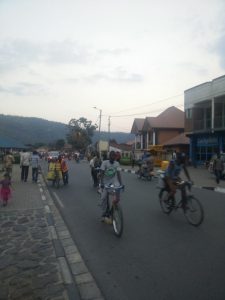 This center is a home to Rwanda’s national cycling team and serves as a hub for African cycling to train more Rwandan cyclists to compete in worldwide cycling competitions and other African riders to use the facility for high performance trainings. The center has attracted various cyclists to this region both for professional trainings and carrying out tourism expeditions due to its conducive environment and rich terrains for practice and mountain trails. ARCC currently offers packages to tourists in need of exploring the mountain gorillas through bicycle trailing. The center allows one to rent bicycles to schools which was fascinating to the GGGI Rwanda team because they were initially looking into the same concept based on the discussion with the District officials while presenting the project to them. 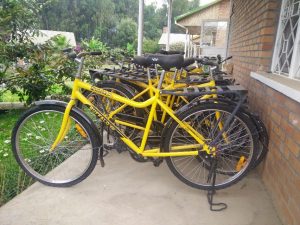 Bicycles for rental in schools 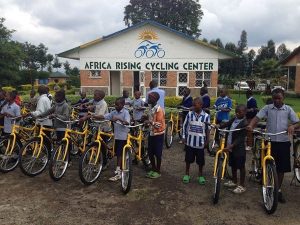 The District Officials coming to the knowledge of this system of bicycle sharing were also captivated to the potential of expanding the PBS into a potential mode of green mobility for the urban and rural parts of the district that have touristic attractions as stated by the Vice Mayor of Musanze District in charge of Economic Development in a local news article published after the PBS on-site assessment by GGGI Rwanda team was concluded.

During the visit at the ARCC facility the PBS team discovered another potential feature the cycling center would complement the PBS Project on,  was the garage facility where any damaged bicycle could be repaired from, due to the level of professionalism that was witnessed in repairing or assembling diverse types of bicycles. 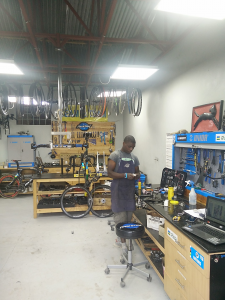 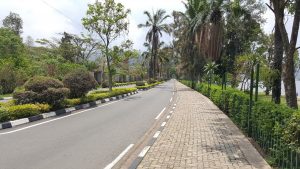 According to Rubavu Vice Mayor for Economic Development in a meeting with the team, the PBS Project is in line with the District vision of “Rwanda Business and Tourism Gateway” whereby Rubavu City will be positioned as an eco-tourism city. Although there is a need for a sustainable transport mode in the city. He also appreciated this initiative and promised district collaboration for the success of the PBS project. 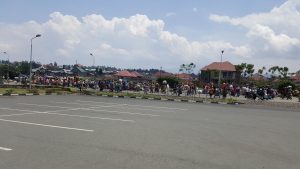 Rubavu city is the largest of the six secondary cities in Rwanda with a population density of 1,940 inhabitants per square kilometre which is greater than the district and national averages of 1,039 and 415 inhabitants/sq. Km respectively. (Source: National Roadmap for Green Secondary City Development-NR, 2015). The city presents a huge traffic that can be easily seen at its borders with Goma namely Petite and Grande Barrière borders. The Petite Barrière border is the busiest border in Rwanda and in the region as its daily cross border movements are estimated between 45,000 and 50,000 people (The New times, July 20th, 2018). With its huge population volume and the presence of both tourist attraction sites and improved infrastructure, Mr. Jean Eric Shyaka, Rubavu District Technical Assistant, estimates that those factors make the city “a potentially favourable area for investment and doing business in the country and will impact the PBS Pilot Project positively towards a sustainable transport in the city and in the whole country in general. 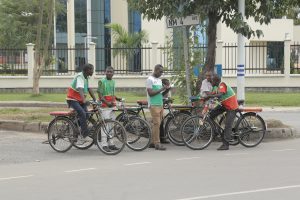 The next phase of the project for the PBS team will include organizing a stakeholder’s consultations to present the results as well as to gather feedback and input from the organizations, actors, and potential users that would benefit from the public bike sharing project. 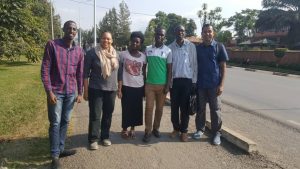 GGGI PBS team with their two volunteers Clarisse and Sebastian 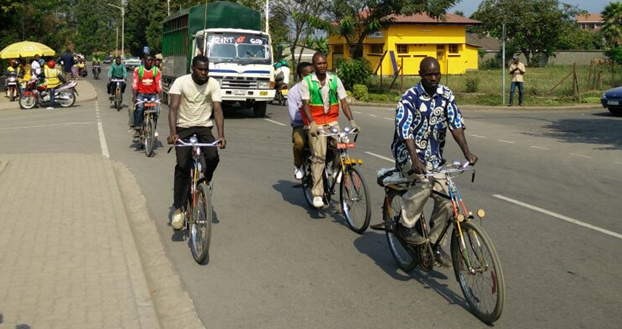