A Solar-powered Irrigation System (SPIS) Project, which is the largest and the first of its kind in the country, pilot-tested at the rift valley area of Negalign locality, Adami Tulu Jido Kombolcha district, East Shoa zone of the Oromia regional state with an outlay of 70,000 USD was officially inaugurated on 30th October 2022. 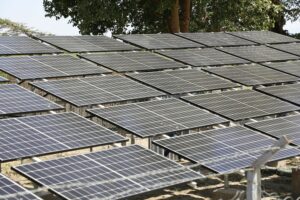 The Pilot Project, which is funded by the Danish Government, embodies 48 panel modules and has a total capacity of generating 17,760-Watt Peak (WP) -each unit producing 370 WP.

The pilot test was installed under the SPIS project, the solar energy flagship of the GGGI Country Program Office, in partnership with the Ministry of Agriculture (MoA) and Oromia Irrigation and Pastoralist Development Bureau. It has a capacity to pump and water up to 90 hectares of land, and is expected to serve about 250 inhabitants of the local community organized under 50 members of irrigation cooperatives.

Some of the invited guests at the inaugural event remarked that the Pilot Project is an exemplary in the solar powered-irrigation system of the country and is worth emulating and scaling up across the nation.

They noted that such an innovative and largescale SPIS spearheaded by GGGI will help contribute to the national initiative of the country to transition from diesel to solar powered irrigation in a bid to help ensure a Climate Smart Agriculture (CSA).

The inaugural event of the SPIS project followed by presentation on the operational modalities, implementation status and potential challenges. An in-depth discussion was made, and remedying measures recommended to address implementation pitfalls head-on.