September 16, 2021; Seoul, Korea – The Global Green Growth Institute (GGGI) and the Korea Gas Corporation (KOGAS) signed a Memorandum of Understanding (MoU) today to promote green hydrogen in developing and emerging countries, including Indonesia. The two organizations have agreed to share knowledge and cooperate to develop joint projects through the provision of technical assistance. KOGAS is a public natural gas company that was established by the Korean government in 1983, expanding its business to hydrogen sector recently.

The MoU was signed at the GGGI Seoul headquarters by Dr. Frank Rijsberman, Director-General of GGGI and Mr. Jin-Yul Yang, Executive Vice President Hydrogen Business Division of KOGAS. Under the MoU, the two parties will work together to share best practices to advance the production and use of green hydrogen in GGGI’s Member countries and explore the possibility of exporting green hydrogen to countries looking to decarbonize their economies.

At the signing ceremony, Dr. Rijsberman highlighted “We believe that Green Hydrogen will be critically important for the transition towards Net Zero […] this will be an important project between member countries of GGGI member countries, such as Indonesia, Morocco, India and Korea”

GGGI and KOGAS have a mutual interest in continued and deepened collaboration supporting the progress toward the Sustainable Development Goals (SDGs) and the Paris Agreement.

The agreement recognizes the strengths of both organizations. On the one hand KOGAS brings cutting edge technical understanding of green hydrogen production while GGGI’s role as a neutral green growth advisor to more than forty countries worldwide can support the development of financially viable green hydrogen projects.

Green Hydrogen production is typically undertaken by using renewable energy to create hydrogen from water. This process will become more economically viable in the near future, largely thanks to improvements in technology and to drastic reductions in the cost of renewable energy production. Through this MOU GGGI and KOGAS are hoping to support emerging economies to leverage the wealth of renewable energy available in the country, promoting its use in local heavy industry and potentially for export to other countries. 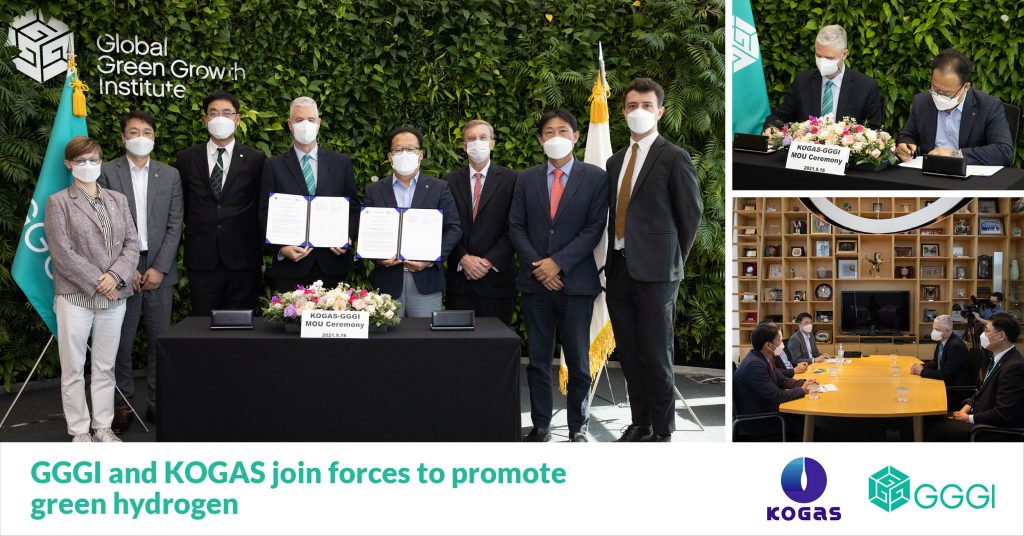