The Fiscal Policy Agency (FPA), Ministry of Finance of the Republic of Indonesia, as the National Designated Authority (NDA) for the Green Climate Fund (GCF) in Indonesia, is developing a study on “Enabling Environment for Private Sector Engagement in Climate Change Adaptation Projects”. The draft results of the study were disseminated to stakeholders on Monday, July 13, 2020 in a webinar. 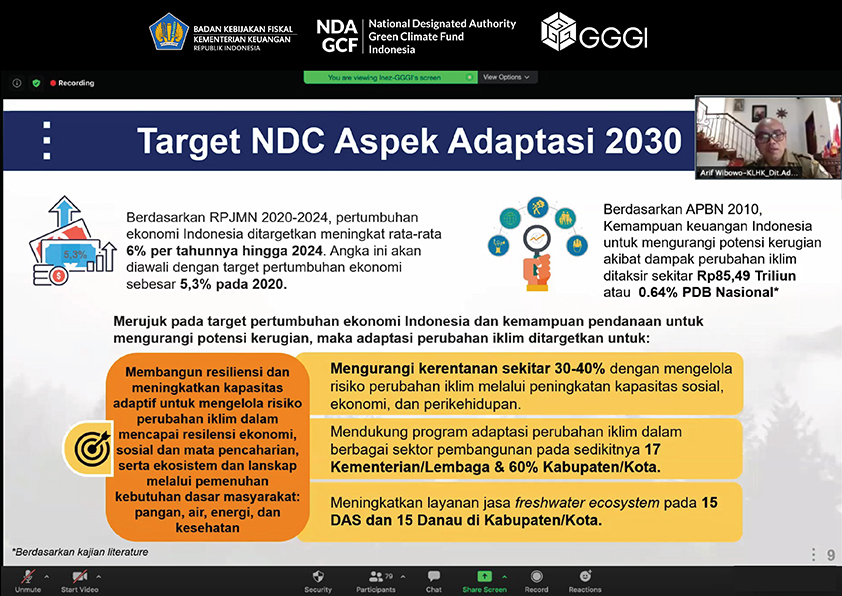 This study, conducted by Global Green Growth Institute (GGGI) and Global CAD, aimed to identify the potential roles of private sector and supporting conditions required in developing a climate change adaptation project. The selected sectors to be explored are based on the adaptation priority sectors defined for Indonesia, the criteria of climate change impact potentials, alignment with GCF priorities, and potentials for private sector contributions, namely freshwater provision and management, agriculture, and health. The three sectors are also aligned with the national adaptation priorities.

In the opening, the Director of FPA’s Center for Climate Change Finance and Multilateral Policy, Adi Budiarso explained that the enhancement of people’s resilience to climate change impacts is crucial, especially in the midst of COVID-19. In Indonesia, climate change adaptation projects are still not as developed as mitigation projects. The challenges in crowding-in private sectors include projects marginal return on investment and lack of awareness on climate change risks. 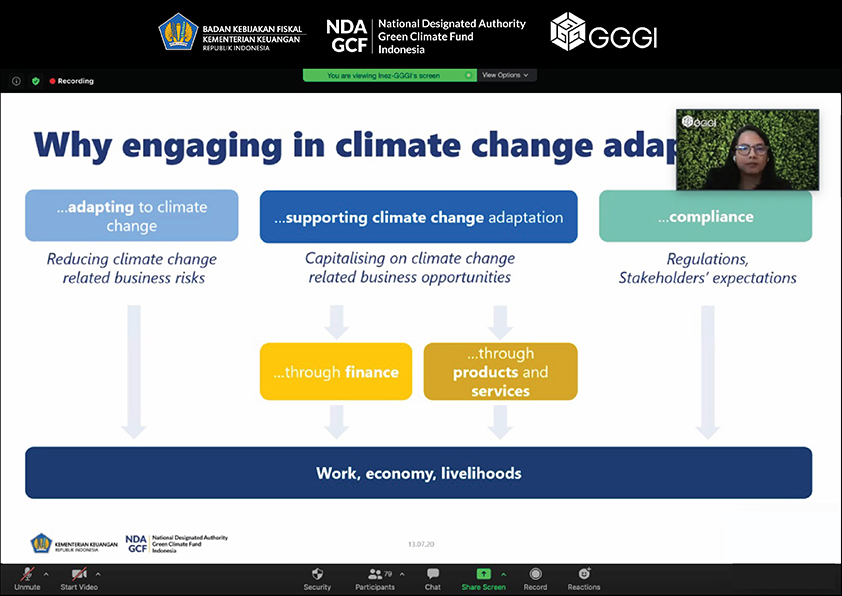 This study aligned with the adaptation aspect of the Nationally Determined Contribution (NDC) roadmap by the Ministry of Environment and Forestry. Arif Wibowo from the Directorate of Climate Change Adaptation conveyed that Indonesia has a potential loss of IDR 110.38 trillion from climate change impacts, and up to IDR 4,328.38 trillion if added with ecosystem damage and related disasters. To cope with this, the NDC roadmap has a vulnerability reduction target of 30%-40% by increasing social, economic, and livelihood capacity.

This study gives the stakeholders an in-depth understanding on Indonesia’s climate change adaptation landscape and provides the Government with required steps to encourage private sector involvement in supporting the NDC’s adaptation targets. This study can also act as a basis for NDA GCF Indonesia for the development of adaptation facilities submitted by Indonesia to the GCF.