Can Korea Power Past Coal? A New World in Which “Solar+Batteries” Becomes the Cheapest Form of Energy

Solar power was the fastest-growing source of new energy worldwide in 2016, outpacing the growth in all other forms of power generation for the first time. According to the International Energy Agency (IEA), on the back of a strong solar PV market, renewable energy accounted for two-thirds of new power added to the world’s grid last year. In addition to this, solar energy is set to surpass nuclear power by the end of 2017.

In Germany, on one sunny breezy Sunday last summer, solar and wind broke a record 85% of all energy used in the country.

The Australian capital city, Canberra, has rapidly achieved the solar and wind investments to shift to 100% renewable energy by 2020, and is now moving to zero emissions by 2030, while the national targets are much more modest.

In the Republic of Korea, renewable energy currently accounts for just 2% of the country’s electricity production, with coal-fired and nuclear plants generating 40% and 30%, respectively. However, Korea’s new Moon Jae-in government has recently increased the target for the share of renewables in power generation to 20% by 2030. 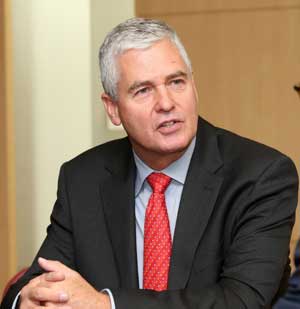 The Korean government plans to set up a renewable energy coordination center in every region; secure a solar system in each village; adopt projects led by local authorities, including offshore wind turbines; and secure economic feasibility of renewable energy through utility-scale renewable energy projects. Is the 20% target too ambitious to achieve in Korea – or is it too modest to deal with the environmental and climate challenges?

The new government’s twin objectives for Korea to become a nuclear free society while also solving the “fine dust” air pollution problems is now actively debated in Korea. Doing both requires reducing nuclear energy, as well as the use of coal and diesel fuel for electricity and transportation. Truly an ambitious, even daunting, set of challenges – but not impossible during a time when both the energy and transportation sectors are experiencing very, very rapid transition.

The speed and depth of the ongoing energy transformation, to renewable energy and to electric mobility, is certainly surprising many around the world. It is a top priority for many governments – making and breaking coalitions – and it is causing disruption in traditional sectors of the economy and employment.

As one country after the next sees record breaking low prices for solar and wind in auctions for utility scale renewable energy, the conventional fossil-fuel powered energy companies pay the price.

In Bonn, at COP23, a new Power-Past-Coal Alliance of twenty countries announced that they will completely phase out coal from their energy mix before 2030. The Alliance hopes to have fifty members before the 2018 UN COP24 climate change conference. That requires a real change in mindset. Is it imaginable that Korea Powers Past Coal by 2030?

E.ON, Germany’s largest utility, for example, had to write off $9Bn in losses last month, half of its remaining market capitalization. No wonder the renewable energy transformation scares the conventional power players and has governments consider whether to protect them.

Countries with large investments in conventional power plants – particularly coal and nuclear – do indeed have a big bill to pay for their stranded assets. Coal-fired power plants that were the cheapest form of energy when constructed only a few years ago risk become albatrosses around energy companies’ necks.

In Bonn, at COP23, a new Power-Past-Coal Alliance of twenty countries announced that they will completely phase out coal from their energy mix before 2030. The Alliance hopes to have fifty members before the 2018 UN COP24 climate change conference. That requires a real change in mindset. Is it imaginable that Korea Powers Past Coal by 2030?

It may seem unrealistic today, but remember that a similar change in the UK just happened, over a shorter period, during a time when renewables were more expensive than today. So why not in Korea?

There are some challenges of course. For example, will this energy transition lead to job losses? Jobs are indeed being lost rapidly in the fossil fuel industry, particularly coal. In Germany, for example, most coal related jobs have already been lost – but at the same time, many more jobs were created in the renewable energy industry.

According to Hans-Josef Fell, a former German parliamentarian for the Green party and current President of Energy Watch Group, the global energy transition to a 100% renewable electricity system can create 37 million jobs by 2050, up by more than 90% from 2015.

As in any rapid technology transition, jobs will indeed be lost, but more new, green jobs are being created, requiring education and re-training of the workforce, but ultimately leading to many new opportunities for businesses and individuals.